How Coca-Cola adopts localization strategy from brand identity in China

Coca-Cola has become an indispensable part of American life. It packs “American Dream” in the bottle, which is a symbol of vitality, passion, creativity and optimism. It’s not only a choice of beverage for American people but also the expression of American spirit and a part of pop culture. Although Coca-Cola has witnessed every historical moment for America in 20 century and become an American cultural icon, at the same time, it is not only spreads and sells the American culture, but takes different strategies to meet the varied taste preferences of consumers everywhere. If coca-cola only limited on the expression of American culture for its marketing, it’s impossible for it to become a brand that can be recognized in the multicultural world. Such as the advertising slogan in American homeland is “can’t beat that feeling”, but in Australia it changed as “real taste”, “coca-cola is in the house” in Russia, “Whatever you wish will come true, enjoy Coca-Cola” in India, advertising slogans always reflect the local culture. When Coca-cola based on American culture connects with Chinese market, it is more difficult for its localization because there are huge differences between eastern and western culture. However, coca-cola finally found a cross-cultural brand marketing mode and put it on “Chinese red” successfully.
Coca-Cola localized in brand identity for china from the following visual aspects.
1. Logo
The Coca-Cola logo, like the product itself, is rated among the most recognized, classical logos and brands in the world. The original bright red and white colour scheme logo is the global unified visual identity of coca-cola. There are three core elements in the visual identity system of Coca-Cola which are broadly accepted by the customers all over the world.


It is this unique name that is remembered by the people from all over the world.
2. Standard colour：red.
Coca-Cola selected red for its standard colour, which is applied in the whole visual identity system, from the logo, employee uniform to the product packaging. As time passed, people associate red with coca-cola when they think of the colour.
3. Typeface with wavy ribbon patterns that make the whole logo vitality and dynamism (as picture 1 above shows).
The dynamic ribbon becomes part of an international graphic language that could be understood by everyone around the world.
All of these are the most valuable treasure and distinctive features of the coca-cola compared with other rivals. Thus, Chinese version logo should implement the continuity of VI concept and present new features while maintaining the brand's original image. That means the logo should not only represent the Chinese characteristics but also has correspondence with the existing visual identity system of coca-cola. Most important thing is Chinese logo must express the key values of the brand also.

First of all, the Chinese name of coca-cola: ke kou ke le
The approach of choosing Chinese name for coca-cola is the nearest pronunciation of English. Moreover the four characters have their own meanings which totally express the concept that coca-cola wants to spread.
可Ke: means permission, can, may.(Same pronunciation with “co”)
口Kou: means mouth(same pronunciation with “ca”)
可Ke: means permission, can, may (same pronunciation with “co”)
乐le: means happiness(same pronunciation with “la”)
The combination of the former two characters mean can eat, good to eat. The later two characters mean can be happy. So the Chinese name of coca-cola means delicious and happy. It is this name that is recognized as one of the most beautiful translation and brings luck and popularity to coca-cola.
Secondly, Coca-Cola Chinese logo design adopts a white on red (as picture 2 shows), which is the most prominent feature of Coca-Cola and also Coincides with traditional Chinese festival colour: red. In china, red has special meanings to Chinese people. It is a traditional popular festival colour which reflects happiness, prosperity，luck, celebration and the spiritual and material pursuits of Chinese people. Whether it was a stroke of luck, the red of coca-cola brings Chinese people familiarity and joyousness. At the same time, using the new Spencerian-style of Chinese typeface emphasized the lucidity of the logo and got perfect combination with its counterpart English version, to convey a contemporary look. Coca-Cola Chinese logo design continues applying wavy ribbon patterns which express the brand value of the company: Infinite possibilities, dynamism and vitality. Even though the Chinese characters are completely different from the English letters, both versions of the trademark today have a very similar and familiar appearance. From visual unity, customers can feel the integration of western and Chinese cultures directly.

2. Packaging
When Coca-Cola adopting a new packaging, it is a talking point for market and audience, not just the product itself but packaging design is also the highlight to attract all eyes. There are three main aspects that coca-cola integrates Chinese culture with packaging, which makes consumers identify its brand, feeling brand affinity without knowing. Coca-Cola’s localization on the packaging is reflected in following three aspects.
(1)  Stars that Chinese young people like 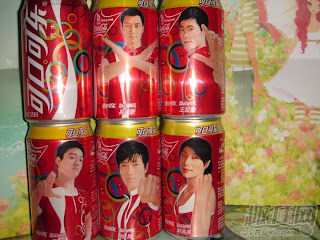 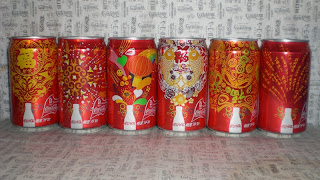 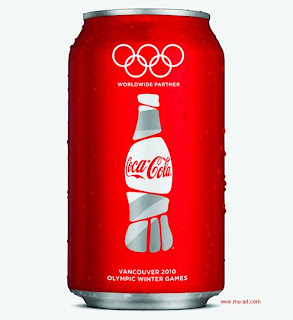 3. Advertising
Understanding target audience is obviously significant for a brand. It’s necessarily for a brand to know the need that its target audience requires. Coca-cola recognized that consumers in different regions have different cultural backgrounds and preferences, especially in china, people desire for Auspicious, jollification and family psychologically. So the company pays more attention to the psychological needs of consumers rather than spread American culture only. 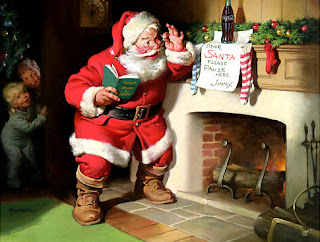 Coca-Cola advertisement in China changed its main popular character in local America“Santa Claus”(as picture 5 above shows)into two children wearing Chinese costume and also joined quite a lot of Chinese elements(as picture 6 shows above), focusing on the expression of the philosophy of family first and harmony. Moreover “Dragon”, “paper-cut”, “shadowgraph” and other symbols of Chinese culture often appear in the advertisement. 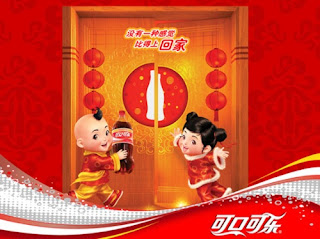 Over the years, coca-cola’s red is still very remarkable in the world. A lot of reasons contribute its success, but as one of most successful brand in the world’s brand marketing, the key elements of success are Cross-cultural communication, localization and insistent of brand value of itself. The mode Coca-Cola took is a kind of Non-aggressive cultural integration and successfully conquered the cross-cultural marketing
发帖者 linying li 时间： 08:06